Mundika is a little village between the cities of Kisumu and Busia on the border of Uganda. Mundika belongs to the sub location of Esikulu with about 14.000 inhabitants of which 60% are children. The sub location has 4 primary schools. The nearest school is at about 5 kilometres and all schools have more than 800 pupils with classes of more than 100 pupils. Safe drinking water is hardly available.

In 2012, we started renovating the 2 existing class rooms that had mud walls and floors. When toilets collapsed, a new toilet group was built and we decided to start building quality standard class rooms. 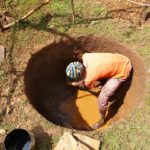 Over the years 4 brick class rooms with concrete floors and 2 toilet groups of each 5 toilets for boys and girls were built. Also, an ECD (early child development) building for the more than 150 pupils was installed.

During the school year 2016/2017 management, teachers, the board of management, parents and a delegation of children will receive training.

Hoog Tijd voor Andersom donated teaching and playing materials and the school now has safe water facilities for drinking water and washing hands. Sports fields and vegetable gardens have been in use since 2016.The number of pupils have been increasing fast to up to 400 towards the end of 2016.

In the beginning of 2017 we started building a library system for the existing 9 classes with the help of Soroptimist International club Bennekom & Beekdal. Every child now has the opportunity to borrow a book each week.

Our donors for this project are several private organisations and persons: Edukans, the Wilde Ganzen, primary schools Nijenoord School in Wageningen, Wilhelmina School in Bennekom and Vleuterweide in Utrecht.